mRNA trafficking and its role in cell polarization, chemotropism, and mating 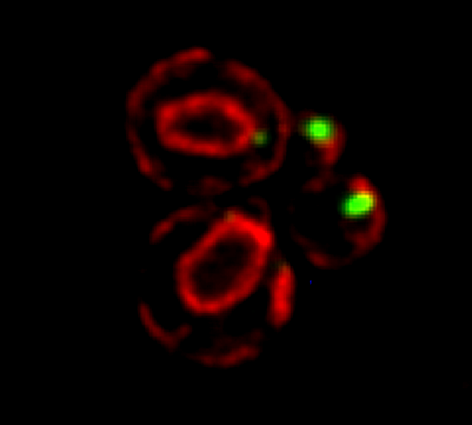 SRO7 mRNA (green) is polarized along with cortical endoplasmic reticulum (red) to the bud tip of dividing yeast cells
mRNAs may undergo trafficking to distal portions of cells in order to confer localized translation and proper deposition of proteins at the distal site. This is particularly important for processes related to cell polarization in yeast, whereby we show that mRNAs encoding polarity and secretion factors (mPOLs) are targeted to the bud [Aronov et al, 2007] or shmoo [Gelin-Licht et al, 2012] tips. While polarized mRNA trafficking is not essential for budding, since Rho family GTPase POLs are membrane-anchored and use the exocytic pathway to reach the cell surface, nonetheless, it is essential for cells to respond to external signals, such as mating pheromone, and to grow in a directional fashion. We identified Scp160, an endoplasmic reticulum (ER)-associated RNA-binding protein, as being essential for the polarization of mRNAs encoding mating pathway components and, in its absence, cells fail to undergo chemotropic growth towards the pheromone source and do not mate [Gelin-Licht et al, 2012]. We also show that the delivery of POL and mating pathway mRNAs to the polarized projections of yeast (e.g. buds, shmoos) is dependent upon co-trafficking with the cortical ER and uses the actomyosin machinery [Aronov et al, 2007; Gelin-Licht et al, 2012]. mRNA co-trafficking with ER membranes appears to be a conserved mechanism for delivering both the message and the translational/translocational platform to distal sites for the local creation of new membrane and proteins necessary to effect changes far away from the cell body [Gerst, 2008].  Using an unbiased screen in yeast, we found >20 novel proteins which regulate pheromone sensing and chemotropism. Inparticular, we found that gradient sensing and chemotropism in yeast is also regulated at the translational level via the physical interaction of the ribosomal associated protein Asc1 with Scp160. Specific ribosomal protein paralogs, Rpl12b and Rpl19b, are required for Scp160-dependent translation regulation of the mating sgnaling pathway [Gelin-Licht et al. bioRxiv 2020].
Ongoing work seeks to identify the mechanisms of RNA trafficking to the ER and determine how RNAs are segregated to cortical ER membranes for asymmetric targeting.