Atomically sharp oxide heterostructures exhibit a range of novel physical phenomena that are absent in the parent compounds. A  prominent example is the appearance of highly conducting and superconducting states at the interface between to band insulator LaAlO3 and SrTiO3. Here we report another emergent phenomenon at the LaMnO3/SrTiO3 interface where an antiferromagnetic Mott insulator abruptly transforms into a nanoscale inhomogeneous magnetic state. Upon increasing the thickness of LaMnO3 from 5 to 6 unit cells, our scanning nanoSQUID-on-tip microscopy shows the transition from an anti-ferromagnet to a disordered ferromagnet on the nanoscale (see Figure 1). 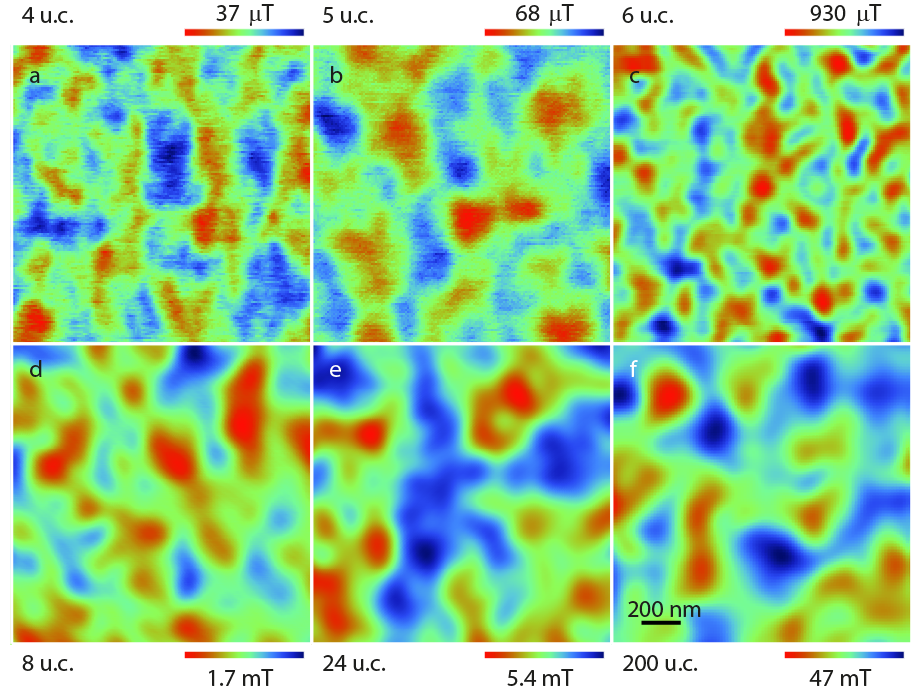 100 nm above the surface. Note more than three orders of magnitude change in color scale between (a) and (f).

The SQUID-on-tip is also used to directly image the sample response to an applied magnetic field (see movie 1). Movie 2 shows the difference of two images taken at different field as field is swept. These movies show that the magnetization reversal of the sample is far from what is expected. Rather than being mediated by domain wall motion as in a conventional ferromagnet, we observe that the reversal of the magnetization is mediated by independent magnetization reversal events. These events are clearly visible as dipole shape features scattered throughout the sample in movie 2.

These findings show spontaneous formation of isolated magnetic islands of 10 to 50 nm diameter, which display thermal activation in response to an in-plane magnetic field. The observed superparamagnetic state manifests the emergence of a thermodynamic electronic phase separation leading to the nucleation of metallic nanoscale ferromagnetic islands embedded in an insulating antiferromagnetic matrix. We derive a charge reconstruction model that describes the sharp onset and the nonmonotonic thickness dependence of the magnetization taking into account the polar nature of the LaMnO3/SrTiO3 heterostructure. The model further suggests that the nearby superparamagnetic-ferromagnetic transition can be gate tuned, holding potential for applications in magnetic storage and spintronics.