We have proposed an edge contamination model which accounts for the observed phenomena and have developed a special experimental approach to test its predictions. Using extended arrays of microscopic Hall sensors we were able to map out the non-uniform current flow patterns across NbSe2 crystals in the vicinity of the so-called peak effect where the critical current is enhanced significantly below the upper critical field. The studies have shown that in the presence of a driving current a disordered vortex solid is injected through the rough sample edges. This 'wrong' disordered phase exhibits a stronger pinning as compared to the thermodynamic ordered lattice.

The mechanism results in the instability phenomena that arise from the competition between the injection of the metastable disordered phase and its dynamic annealing by the transport current. For an ac current, only narrow regions near the edges are disordered, while for dc bias most of the sample is filled by the disordered phase, preventing vortex motion. The resulting spatial profile of the disorder across the sample acts as an active memory of the previous history of the applied current. 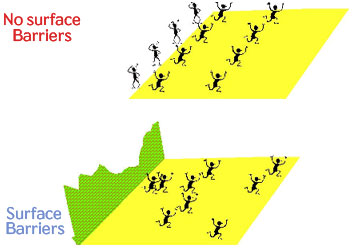