We studied the effect of in-plane field (Hx) on the flux penetration and hysteretic magnetization in BSCCO crystals at elevated temperatures. At these temperatures the exit and entrance of vortices into the sample is governed by geometrical [1] that cause a nonuniform vortex distribution inside the sample in a form of a dome in the center of the sample. The BSCCO crystal is cut in into a rectangular thin platelet shape and the magnetic field (Hz || c-axis) is applied perpendicular to the large surface of the crystal. When ramping the ﬁeld from zero in absence of Hx the sample is initially in the Meissner state and the induction in the bulk of the sample is zero everywhere. After the Hz is increased past the penetration ﬁeld, vortices overcome the geometrical barrier and penetrate the sample.

These vortices are swept to the sample center and accumulate there forming a dome-shaped induction proﬁle in the center of the sample which is surrounded by macroscopic ﬂux-free regions. As the ﬁeld is further increased, more vortices enter the sample, the dome expands, and the ﬂux-free regions shrink. Vortices are trapped in the dome as long as the surrounding vortex-free regions are present. As a result, when Hz starts to decrease from its maximum value (10 Oe in the movie below), the dome continues to expand initially until it reaches the sample edges, at which point vortices begin exiting the sample. The corresponding width of the dome shows a large hysteresis.

The behavior in presence of in-plane ﬁeld Hx is markedly diﬀerent. The in-plane ﬁeld penetrates in a form of stacks of Josephson vortices (JVs) which are decorated by the pancake vortices (PVs) and are visible as stripes along the direction of Hx (top figure). The stripes were expected to be visible only inside the dome where PVs are present. Surprisingly, the stripes are visible also in the vortex-free regions outside the dome indicating that the JVs locally suppress the geometrical barrier allowing the PVs to form "whiskers" along the JVs that extend out of the dome and reach sample edges. These JV stacks thus apparently serve as narrow channels for easy vortex entry and exit through the geometrical barrier. As a result the magnetization and the width of the dome show essentially reversible behavior as seen in the movie.

The movie (see below) shows the evolution of the magnetic ﬁeld in an over-doped Bi2Sr2CaCu2O8+δ crystal at T = 75 K upon sweeping the perpendicular magnetic ﬁeld Hz from 0 to 10 Oe and back with (left) and without (right) a constant in-plane ﬁeld Hx. The sample induction is measured using differential magneto-optics with field modulation 2dH = 0.8 Oe in which the gray scale of the images reﬂects the differential local induction δB(x, y) that is obtained by subtracting the induction images B(x, y) taken at Hz = H0 −dH from images taken at Hz = H0 + dH and averaging over few tens of such images.

In these images the top and bottom sample edges appear white, the geometrical barrier dome edges appear dark, and the surrounding ﬂux-free regions appear gray with the full gray scale corresponding to 2.5 G. The right-hand-side of the sample coincides with the right edge of the image while the left-hand-side of the sample is about 0.5 mm to the left of the ﬁeld of view. Note that the images are rotated 90 degrees with respect to the corresponding images in the paper. The mean width of the dome as extracted from the movies is shown in the bottom row. The movies demonstrate that in the absence of Hx (left) the vortex dome and corresponding magnetization are highly hysteretic consistent with geometrical barrier model. In contrast, in the presence of a constant Hx (right) the JV stacks result in unexpected formation of vortex “whiskers” in the vortex-free regions that act as easy flow channels through the geometrical barrier, giving rise to reversible magnetization. 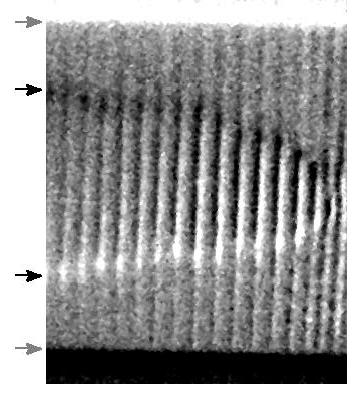 A current modulated DMO image of the decorated JV's (slightly tilted vertical lines) inside and outside the dome in sample B. The top and bottom edges of the sample are marked by gray arrows and the dome edges by black arrows. The center of the sample coincides approximately with the image left side while the right edge of the sample is slightly to the right of the image right edge. As a result, the visible dome has  the shape of half an ellipse. The decorated JV's display a large contrast inside the dome while their whisker-like protrusions outside the dome display a lower contrast. The image was taken using differential magneto-optics with modulation of the applied current 2dI=12 mA at T=77 K and Hz=3.6 Oe. The gray scale corresponds to about 0.5 G. The image height is 0.4 mm.