Differential magneto-optical imaging of the vortex lattice melting process in BSCCO in perpendicular magnetic field shows that nucleation and propagation of the melting front across the sample is highly nonuniform. The melting nucleates on sample defects and the spatial pattern of the melting images roughly follows the pattern of the defects. In the absence of in-plane field, the defects that govern the melting landscape are growth defects where the crystal stoichiometry is slightly different.

These defects induce a melting pattern that shows transversing long arc-shaped melting regions. When an in-plane field is applied, a lattice of Josephson vortices (JVs) is formed that crosses the lattice of the pancake vortices (PVs). Since the JVs interact with the PV lattice the JV lattice induces a secondary effective periodic potential that alters the melting landscape. As a result the lattice melting follows not only the shape of the growth defects but also that of the JV stacks. The images and the movies below present some of the features of the melting process in the presence of JV lattice for various orientations of the in-plane field HIP.

The movie compares the melting patterns of the pancake vortex lattice when there is a weak constant in-plane field applied at two different in-plane angles. The movie shows field modulated DMO images while scanning the perpendicular field at a constant temperature, T=85 K. It starts at Hz=0 Oe, where the sample is in Meissner state and no flux penetrates the sample. As the field increases, vortices enter the sample and at Hz ~ 5 Oe, the sample is completely filled with vortices.

At Hz ~ 18 Oe, the pancake lattice starts melting, and the melting front appears as white regions in the images. The melting first nucleates on the growth defects, which are long horizontal lines, and then follows the secondary landscape dictated by the JV stacks dense and regularly-spaced, diagonal lines in the same direction as the chains seen at lower fields. 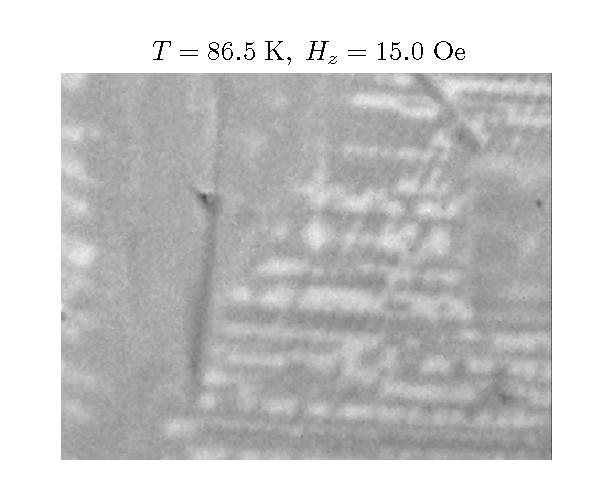 The melting process guided by the JV stacks is seen more clearly in the second movie which shows field modulated DMO images while temperature is scanned at a constant magnetic field Hz = 15 Oe and an in-plane field HIP=15 Oe, 120°.