Prof. Eytan Domany has been awarded the Sergio Lombroso Award in Cancer Research. The award has been given annually since 1998 to outstanding researchers throughout the world studying various aspects of the set of diseases known as cancer. The award was established through the estate of Sergio Lombroso of Verona, Italy, an attorney whose generosity has enabled the Weizmann Institute to recognize world-class investigators in this field.  The award is given in alternate years to Israeli scientists and scientists from abroad.

Prof. Domany’s expertise is in the field of statistical physics. His current research interests focus on the development of computational methods, with a special emphasis on applications to biologically motivated problems, in particular, analysis of high-throughput biological data. He works with several groups from the life sciences, in Israel and abroad, on analysis of human gene expression data obtained from DNA chips, with an emphasis on studies of cancer.

Prof. Domany joins the ranks of world-class Weizmann Institute scientists who have received the Lombroso Prize, including Prof. Zvi Livneh, the 2014 winner who specializes in DNA repair and serves today as Dean of the Faculty of Biochemistry. In 2015, the award was given to Prof. Tyler Jacks, the Director of the Koch Institute for Integrative Cancer Research at the Massachusetts Institute of Technology.

The Sergio Lombroso estate also provides funds for Italian students and postdocs to study and work at the Weizmann Institute.

Prof. Domany is the incumbent of the Henry J. Leir Professorial Chair. 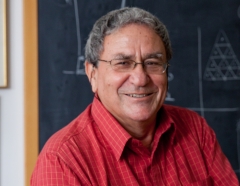