A window to the campus

The Visitors Center is temporarily closed, so in order to “bring” the campus to visitors all around the globe, we have created a series titled: A window to the campus. Each video in the series will highlight a different aspect of the Institute, including its interesting buildings, state-of-the-art labs, people, history, art, family life on campus, and more. We hope that we will be able to host you here sometime soon, and in the meantime – enjoy!

Home is where the heart is

In the second episode of our new series, discover three unique houses on campus whose owners contributed significantly to the establishment of the State of Israel and the Weizmann Institute of Science.

Take a virtual tour of the Weizmann Institute and discover some of its special labs that are tucked away and hidden from immediate view, in the third episode of “A window to the Campus”.

From a mountain of sand to a flourishing garden

In the fourth episode of "A Window to the Campus," learn about Dr. Chaim Weizmann's vision of creating a campus that rivals some of the most beautiful campuses in the world, and how Prof. Asaph Aharoni is taking advantage of these gardens for his research.

In the fifth episode of "A window to the Campus" Weizmann Institute women scientists speak about the cutting edge research they are conducting in their labs.

A World of Scientists

In this episode of 'A window to the campus,' we look at the effort that the Weizmann Institute of Science has made to internationalize the campus, with a few scientists sharing what motivated them to come study and work at the Institute. 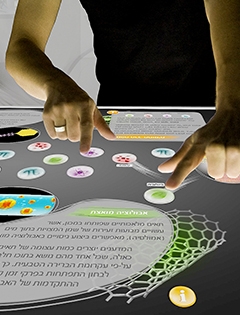