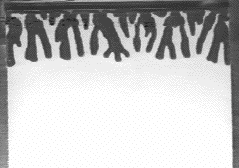 The fingers tend to tip split but strictly avoid each other. The distance between fingers depends on the oxygen input velocity, while the width of the finger is determined by a number of factors such as the size of the gap through which the oxygen is supplied, and the actual gas composition.

The parameters in this example are extremely close to extinction of the flame.