Both scientific researchers and clinical workers put the development of children with abnormal behavior at the heart of their interest. However, these two groups of professionals seem to be advancing in disconnected lines with little dialogue between them. Clinicians deal with individuals with abnormal development on a daily basis. Their experience and observations, although not always quantitative and experiment based, may serve as clues and hints as to how the scientific quest for the understanding of Autism and other developmental disorders should advance. Unfortunately, because of the large variability in individual behavior and response to therapy, these observations have rarely been used to guide scientific thought.

We believe that the inter-variability among individuals, rather than being regarded as "noise" that obscures the attempt to generalize behaviors, may in fact be the main issue that needs to be understood. The growing understandings in Neuroscience of the brain as a network with complex underlying dynamics enables scientists to address these questions, from a systems point of view.

Our approach is to identify those therapies that seem to be most in line with the most updated view of brain development and translate into "brain" terms the work that is being done by these therapies. We do this by ongoing interactions and discussions with therapists in order to make sure we understand the heart of this therapeutical work. A careful examination of this clinical work with Autism is revealing a fundamental network that is required for healthy development. Its components include the mutually interacting sensory, emotion and motor systems. Crucial dynamic notions are balance and stability, where balance refers to tuning the activity within an optimal range of parameters. Stability assures that fluctuations in tuning are not prohibitively large. Extension of the model to include the memory system accounts for the wide spectrum of autistic states, and for the variability in response to treatment. We propose that many paths lead to instability, but it is the severity rather than the initial cause that determines the degree of disorder (e.g. low- or high-functional Autism, Attention and Hyperactive Deficit Disorder, or a mild language disorder). This implies that developing tools that measure the degree of instability is necessary to distinguish the different developmental disorders. Our model suggests specific behavioral and physiological markers for instability, such as sensory sensitivity, to screen for individuals with a higher susceptibility to develop disorders. 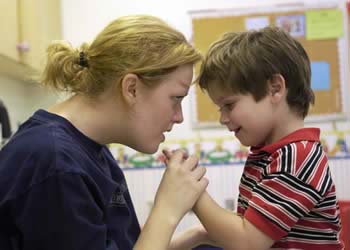 Oral presentation given at the Israeli Society for Neuroscience (ISFN), Eilat, 2007.