Neurons in the brain perform amazing calculations in a flash, but if you put them into a dish they become sluggish and 'stupid' - i.e. their response repertoire is very limited. Our principal question is how the connections between the neurons can be manipulated so as to improve their computational capacity.

In the current project, we used 1D cultures and took one step up the dimensionality scale to create "function-follows-structure" neuronal devices. For example the triangular diode alternates between one and two dimensional patterns to create an asymmetric connectivity between ensembles of neurons. The transmission of signals along a line that includes these devices is necessary if we want to measure the performance of our devices - this is how we are able to control their input, located in a defined area of the culture, and measure their output, located at a different area. 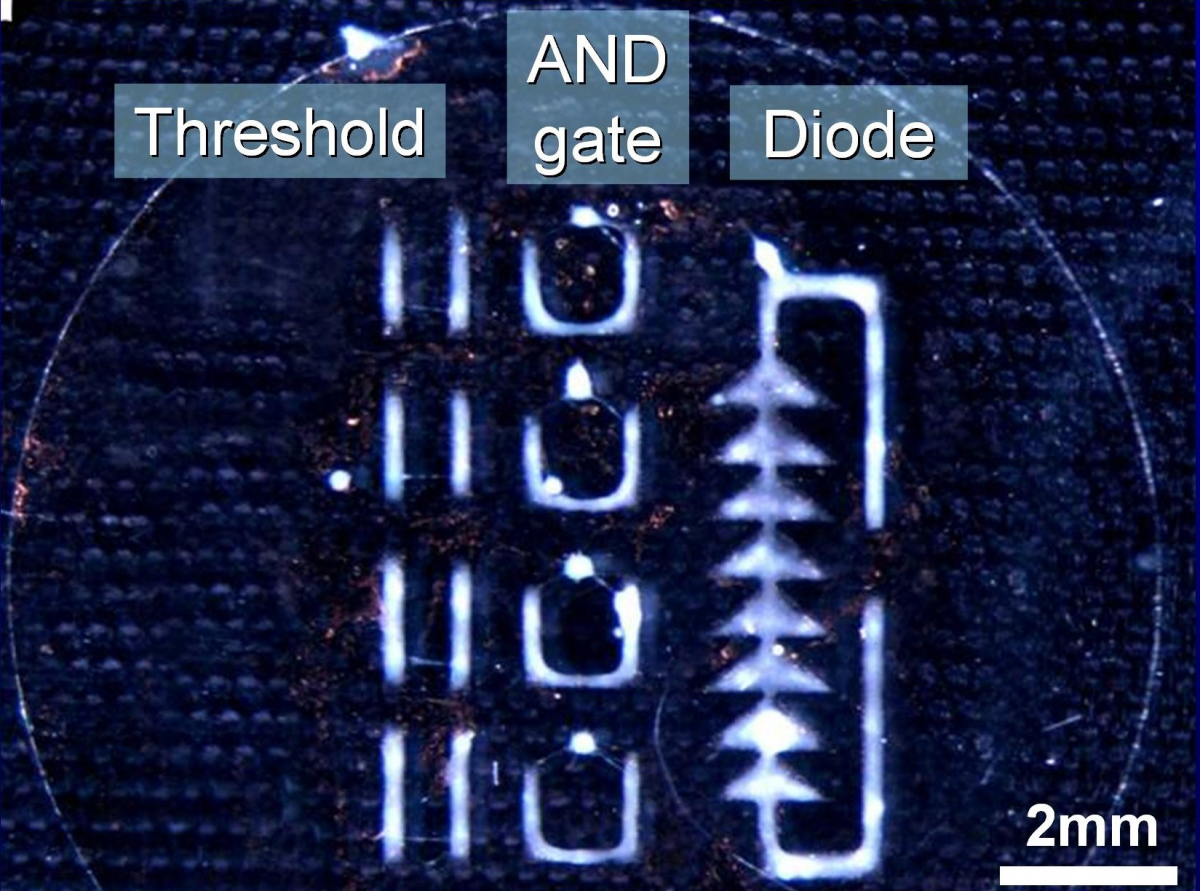 Nine separate neuronal devices patterned on a single 13mm coverslip (4 Thresholds on the left column, 4 AND gates on the center column and on the right a composite Diode consisting of 8 daisy-chained triangles). Dark field illumination, bright areas are concentrations of neurons.

Hippocampal neurons growing on patternned glass coverslip (field of view is centered on a connection between two triangles, see previous figure). In a few hours cell bodies send axons and connect between themselves.

Threshold
Two parallel straight lines connected with a thin line(<50µm). Here, Input signals of population activity were observed at the right line and the resulting output signals were measured at the left line. Only signals whose strength surpassed a limit propagated to the other side.

AND gate
A pair of straight lines served as inputs, interconnected at one end with a thick perpendicular line. At the other end they were connected via two thin lines to a central region serving as Output. When the two Input regions were disconnected (via local application of TTX - red arrow) they fired independently and no Output response was observed (0^1=0, 1^0=0). When both Input regions fired synchronously, the Output region responded (1^1=1). 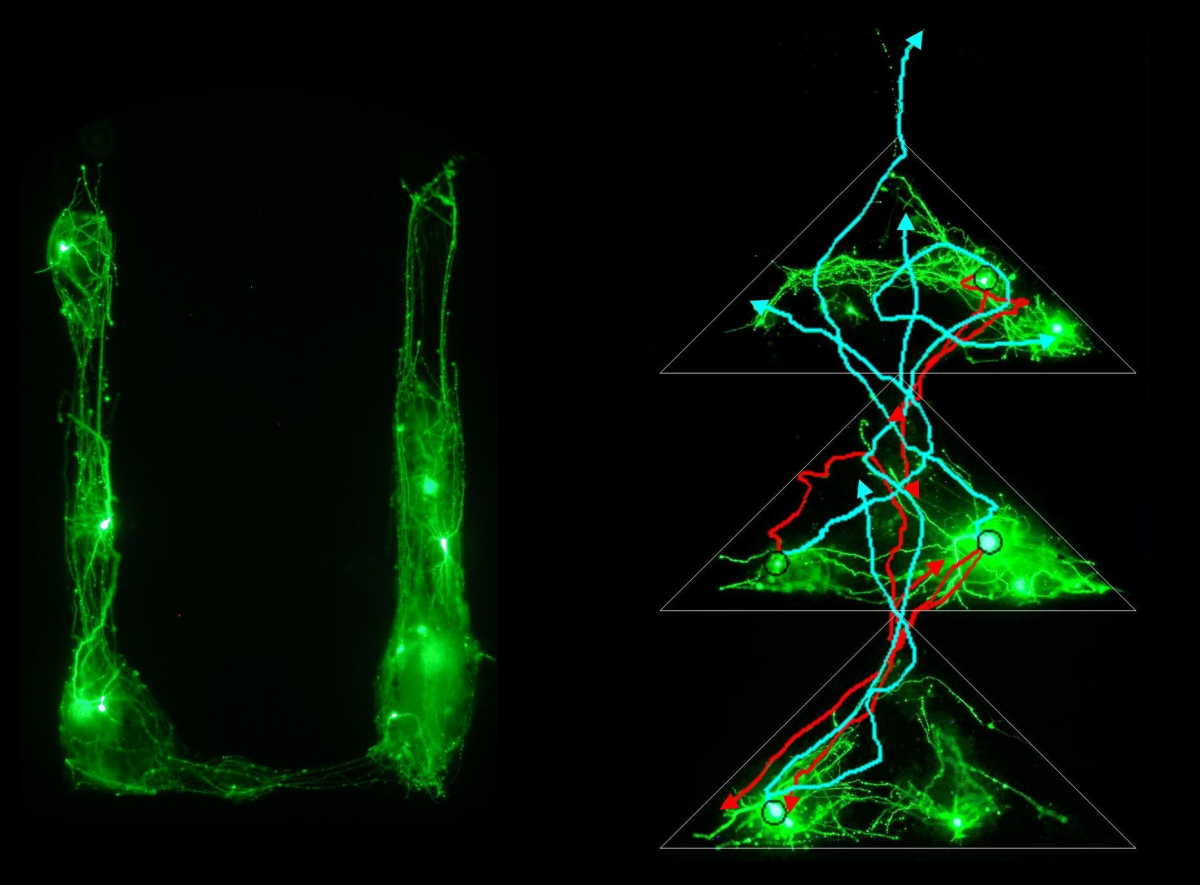 Neuronal Devices expressing GFP provide insight on how structure affects function. In the Threshold (left) the thin section limit the number of axons that connect the lines. In the Diode, the triangles funnel axons forward to the next triangle (cyan tracks) and backward crossings are less likely (red tracks). 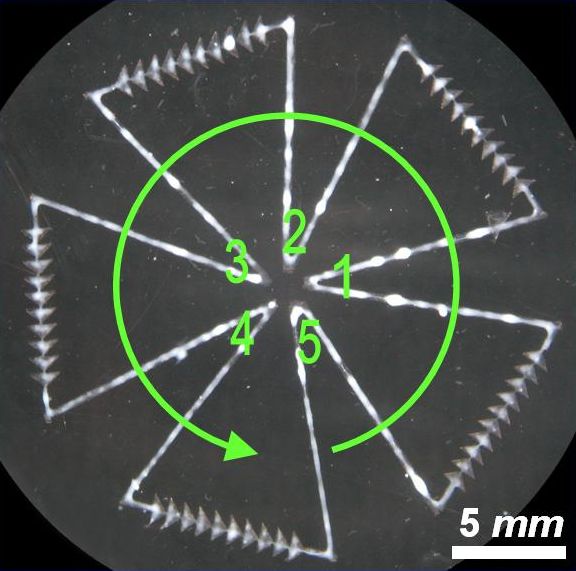 Oscillator
A neuronal Oscillator can be assembled by combining diodes into a closed loop. Usually, signals in a closed loop propagate in both directions and at a point of rendevouz both fronts "annihilate" due to the refractoriness property of bursts (neurons have to "rest" between bursts). Here, the diodes determine a single direction of propagation and by the time a signal completes a cycle along the Oscillator, the refractory period is over and the burstis free to repeat itself.

Here the center region of the oscillator is imaged while a signal completes a single anti-clockwise loop.

Our primary goal is to understand how computation comes about from an ensemble of neurons. We believe that building these logic devices not only provides a methodology for precise monitor and control over neural networks but also insight on how they function. For example, the existence of a threshold level for activation turns out to play a central role in neuronal computation. We encounter this phenomenon for the case of neuronal ensembles and also in other, percolating neuronal network systems that we investigate in the lab.