In the 21st century, the brain is still a mystery. Mapping precisely the locations responsible for different brain functions is a challenge that many scientists confront. Physicists may contribute to this effort by developing new imaging techniques that will make it possible to "view" the inside of the brain. In this project a new method for measuring brain activity non-invasively is presented.

Measuring brain activity non-invasively is a major task for understanding brain functioning. Several methods already exist for performing non-invasive measurements. The most common are the fMRI (functional Magnetic Resonance Imaging) and the EEG (Electroencephalogram). Other methods are the MEG (Magneto Encephalogram) and PET (Positron Emission Topography).

The method in this project is an optical method that relies on various researches done in the field of tissue-optics in resent years, some of them forming the basis for clinical tools. Right now this method is complementary to EEG measurements but it may stand on its own with further research. The method consists of shining the intact skull with light, detecting the light that emerges from it (Fig. 2), and then trying to find traces of electrical activity by analyzing the detected light. In the conducted experiments, I tested this method by looking for correlations between the electric signal as measured by the EEG and the optical signal. The brain signals we are trying to measure are alpha brain waves which are a periodic signal in the range of 7-13 Hz. alpha waves are usually described as occurring during relaxed wakefulness. They appear initially at the visual cortex and spread to the entire cortex as one becomes more relaxed. It is possible to generate induced alpha waves by applying a visual stimulus at the alphafrequency (Fig. 3, Fig. 4). The alpha waves are then phase locked to the stimulus and it is possible to control the alpha frequency and time-tune it by shifting the stimulus frequency. 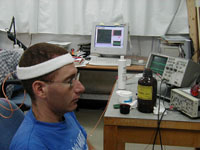 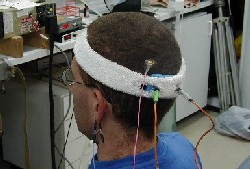 Fig.2 The optical fibers that are used to shine and collect light to/from the skull and the EEG electrodes. 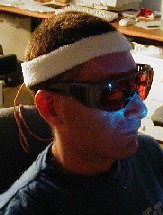 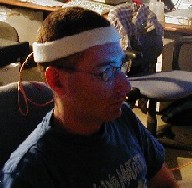