The main goal of this study was to utilize Transcranial Magnetic Stimulation (TMS) perturbations to study the connectivity and stability of a distributed cognitive network in the brain of both healthy people and people with Schizophrenia. Transcranial Magnetic Stimulation is a non-invasive method in which a strong pulsed magnetic field applied at the scalp produces electric currents inside the brain. The magnetic field decreases rapidly with distance enabling effective stimulation only of areas relatively close to the surface of the cortex.

TMS was used in an externally paced finger tapping task, perturbing the internal network oscillations invoked by the finger motion as it keeps pace with a metronome. Although a relatively simple task, it induces activation of a distributed neural network of frontal, sensorimotor, cerebellar and deep brain areas that underlie brain functions of volition, awareness of action, attention, timing, motor planning, motor execution, sensory-feedback and error monitoring mechanisms. TMS perturbations were synchronized to the metronome and applied to the network at the level of the primary motor cortex (M1) - see Figure 1 for setup.

First we were able to show, in both healthy and Schizophrenia subjects, that TMS perturbation could separate different components of the network. TMS perturbations profoundly affected the motion of the finger, resulting in two abnormal behaviors that subjects were unaware of; a doubling of the frequency of the tap and a stalling of the finger for half the period (see Figure 2). Tapping accuracy itself was surprisingly not affected (Figure 3), suggesting that the timing process involved in controlling the tapping movement is separate from the motor processes in charge of execution of the motor commands.

In subjects with Schizophrenia TMS perturbations permeated to other components of the network, altering perception of timing accuracy and invoking high-level deficiencies related to attention and volition in the form of lapses (Figure 4 in yellow). These lapses, defined as little to no movement of the finger during a metronome period, were observed when these subjects were tapping with the TMS perturbation.

We then performed the TMS perturbations described above while manipulating in parallel putative components of the network underlying the finger tapping task. In one condition attention was deviated away from the tapping task into a parallel mental arithmetic task. In the second condition the left dorsolateral prefrontal cortex (L-DLPFC) was inhibited by repetitive TMS prior to the tapping task, and lasted presumably during the whole experiment.

In people with Schizophrenia, these manipulations similarly enhanced the effect of the TMS perturbations on different components of the system. The lapses, which appeared only in patients with Schizophrenia, were significantly aggravated by the attention shifting condition. L-DLPFC inhibition caused a significant improvement in the performance of the finger when it tapped together with the TMS perturbations and seemed to reduce the probability of occurrence of lapses. The DLPFC has previously been associated with high executive functions and altered activation in it appears to be specific to the disease process of Schizophrenia. The fact that lesioning it improved finger performance of subjects with Schizophrenia and affected possible error correction, timing and attention processes, suggests that the L-DLPFC is a link in a network governing finger tapping, which is mal-functional in Schizophrenia, and that removal of the L-DLPFC component alleviates its dysfunction. 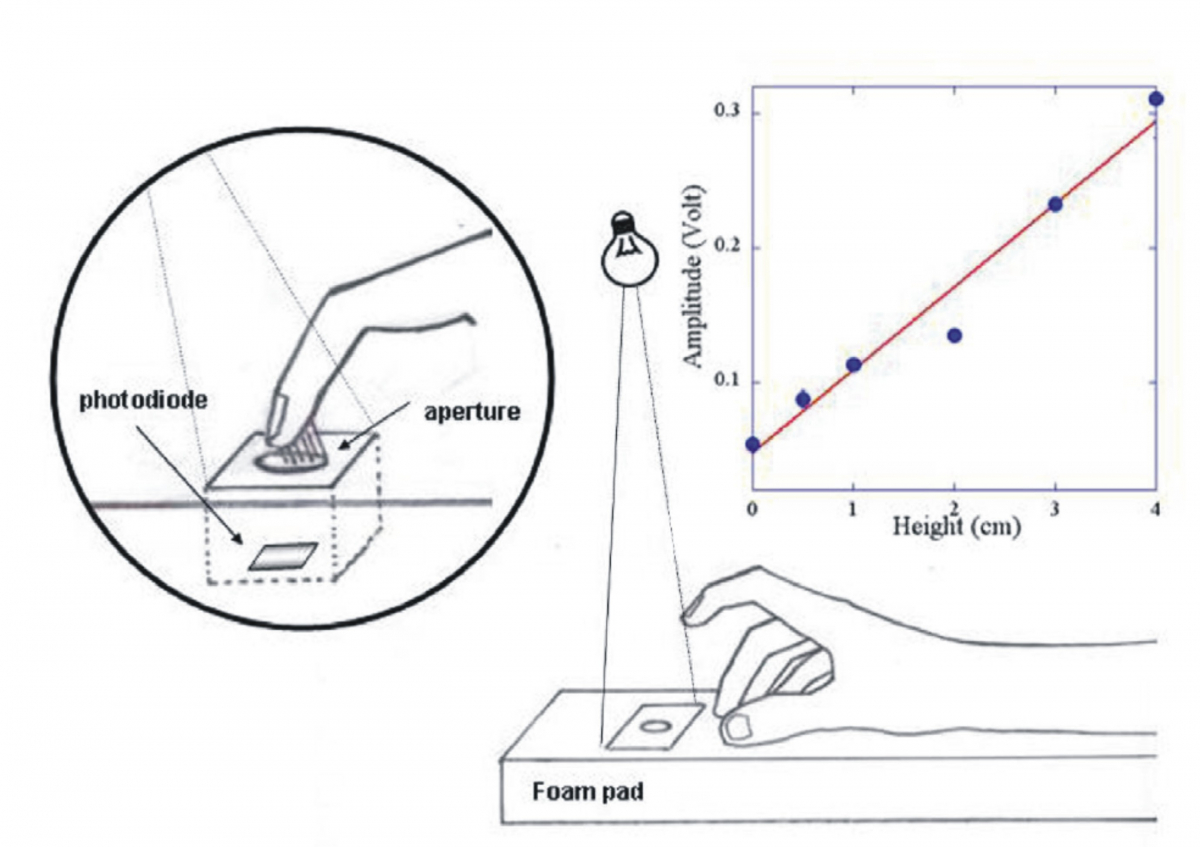 Figure 1. Finger measurement setup. Subjects sat comfortably on a chair with their dominant hand resting on a foam pad. A photodiode was positioned inside the pad, and a thin semi-transparent tape covered the aperture of the photodiode box. An incandescent light was placed about half a meter above the photodiode, at a slight angle to it. When the finger was resting on the hole it blocked the light from reaching the photodiode and a minimal current was obtained from it. As the finger detached from the pad and moved higher more light entered the hole (left inset), and the photodiode current increased. Right inset shows a calibration test for one subject. The finger height was linearly proportional to the photodiode output. 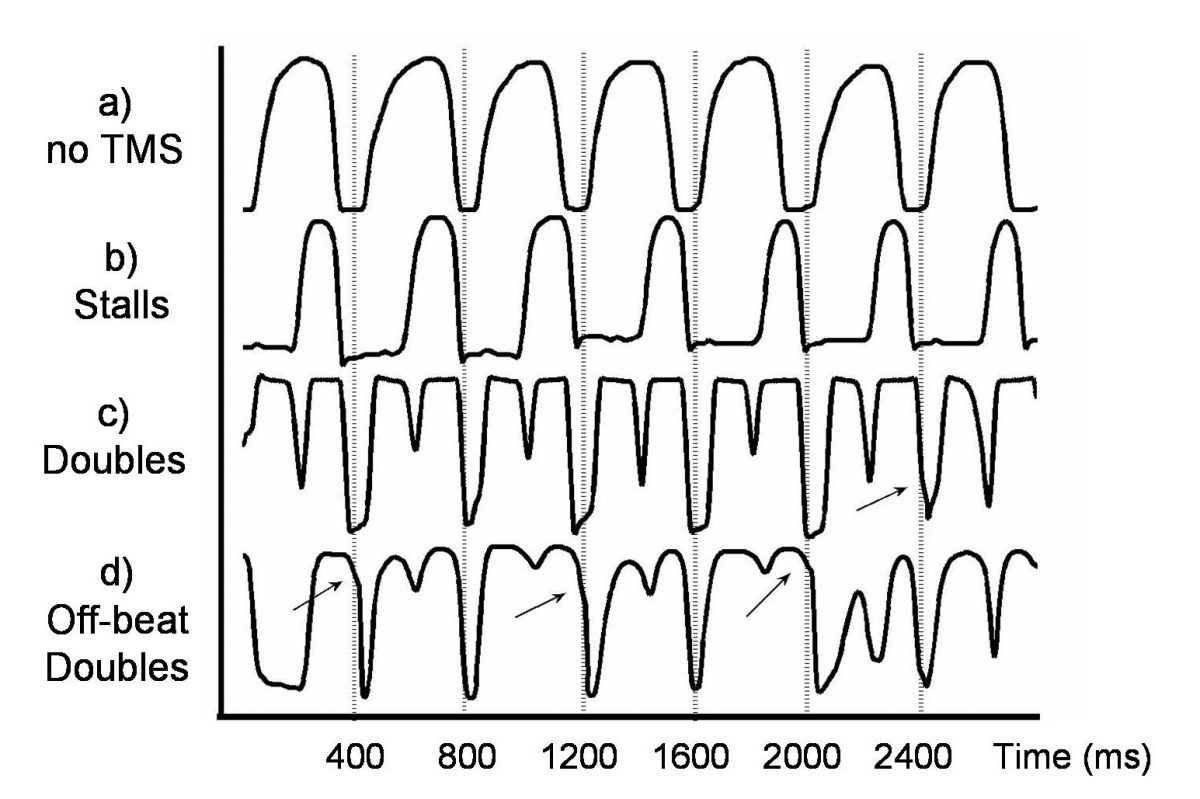 Figure 2. Tapping Profiles. Finger height versus time for the three types of observed motion: a) Normal tapping without TMS, b) the stall effect with TMS, in which the finger remains down much longer, and c) the double motion with TMS, in which the finger taps at twice the required rate. d) shows examples of doubles occurring when subjects were off beat (indicated by arrows). There is no sharp deviation in motion as a result of TMS though the finger is moving, and subsequent taps are similar those in part c). The dashed vertical lines are separated by 400 ms, and indicate the times of metronome signals (in a) as well as TMS pulses in b), c) and d).

An example of the tapping experiment. Notice the double movement of the finger once the TMS is activated. 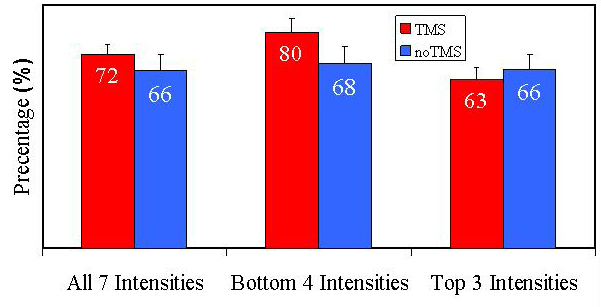 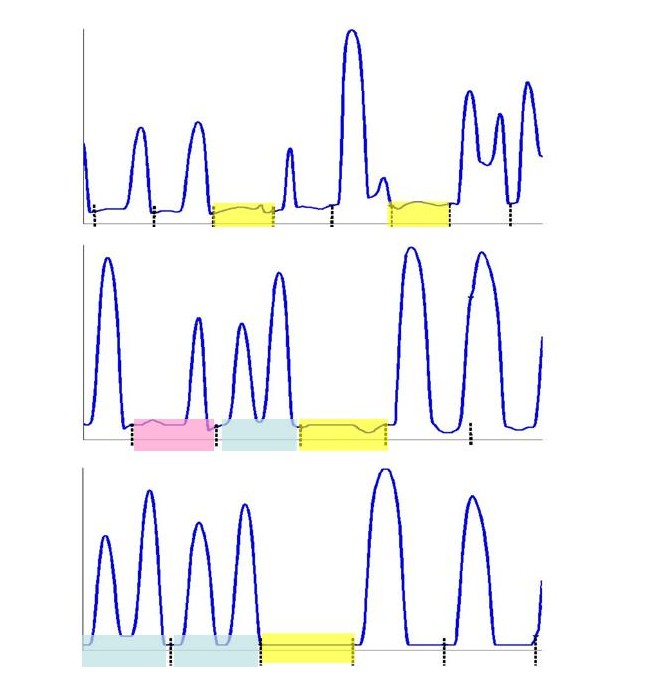 Figure 4. Example of lapses, "doubles" and "stalls" in the tapping of Schizophrenia patients. Displayed are three tapping profiles of Schizophrenia patients. Highlighted in yellow are examples of lapses in the tapping. Lapses are defined as little to no movement of the finger for at least one whole metronome period. Highlighted in blue are examples of taps where the finger performed and extra tap. These taps were tagged as "doubles". Highlighted in pink is an example of a tap where the finger stalled for approximately half a period before performing the tap in the remaining half of the period. Such taps were tagged as "stalls".